The Night Stars in the Night Sky 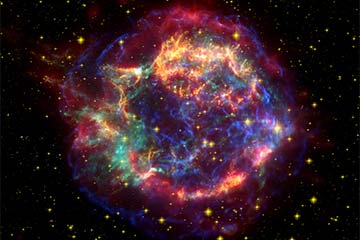 The 86th chapter of the Qur’an is a miraculous insight into what scientists call “the neutron star”. It begins thus:

By the sky and the night comer –

And what can make you know what is the night comer?

It is the piercing star

In this chapter, Allah swears by the sky and ‘night comer’: “And what can make you know what is the night comer?” to which Allah replies Himself: “It is the piercing star”.

Scientists speak of an entity called the pulsars (or neutron stars), to which the ‘night comer’ mentioned in this chapter have striking similarities.

The properties mentioned in this chapter of the Qur’an for the ‘night comer’ are as follows:

Check out the sound here.

The Science in the Shadows:

All neutron stars emit electromagnetic waves (X-rays, UV, visible light and radio waves) along its poles, but there are some unique ones whose axis of radiation is inclined with respect to the axis of their rotation, which makes them similar to lighthouses – as their radiation apparently goes ON and OFF due to the wobbling along the axis. This is also why these neutron stars are termed ‘the pulsars’ because the light and other waves reach us on earth as pulses.

A (Neutron) Star is Born

For the structural integrity of a star, there are two forces acting against each other:

If the parent star has a mass more than 1.4 times the mass of the sun (called “Chandrasekhar limit”), the gravitational forces overcome the electron degeneracy force and squeeze all the mass of star to around 20 km in diameter. Under this immense pressure, the subatomic particles merge together to form neutrons, along with some stray protons and electrons that potentially survive this process.

After the implosion, there is another force called neutron degeneracy, which is the resistance to the pushing force of gravity by the neutrons; this is the force responsible for the existence of neutron stars and if gravity overcomes this neutron degeneracy, a black hole is formed.

The newly born neutron star spins at a fraction of the speed of light in order to conserve angular momentum of its parent star, which was millions of times bigger than the current neutron star. This rotation causes the motion of the stray charged particles to speed up and produce huge magnetic force, which in turn produces an electric field, thereby aligning the charged particles inside the neutron star (This is known as the Lorentz force).

As the electrons jump back to its lower energy state, they release electromagnetic radiation, which is seen as light, gamma rays, X-rays and radio waves. The charged particles being aligned in the magnetic field release coherent beams of electromagnetic waves.

This characteristic of radio waves is the reason it coincides with the star mentioned in this chapter of the Qur’an.

In essence, sound cannot pass through space; it is the amplitude modulated signal of pulsars which can be decoded by radio receivers. Every pulsar has a unique radio frequency signature. Some common ones are:

To find out more about coordinates in space, click here.

The sound of pulsar depends on the number of cycles it rotates in one second, ranging up to 650 times per second. Check these out: 1 2 3 4

Has not the time come for the hearts of those who believe to be softened and humbled by Allah’s Reminder, such that they be not amongst those upon whom the Divine Book was revealed and the term was prolonged for them and so their hearts were hardened and many of them were disobedient to Allah?

These are the people who remember Allah standing, and sitting and (lying) on their sides and reflect upon the creation of the heavens and the earth (and say) `Our Lord! You have not created (all) this in vain. Glory be to You, save us from the punishment of the Fire.

Syed Ubaid is a guest writer for Quintessence. He can be reached on Twitter @SyedUbaid1995

What is a Pulsar