The Swing in the Backyard 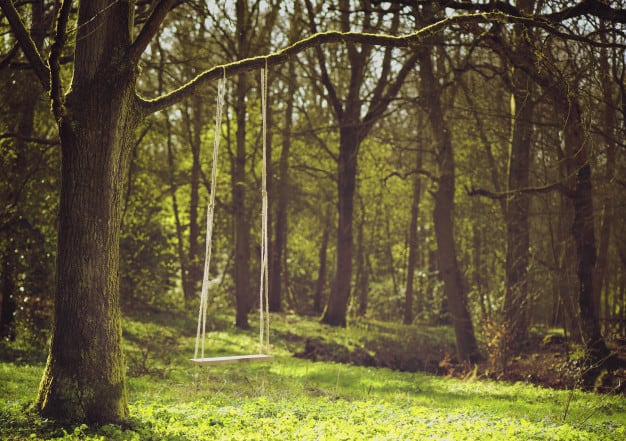 I was using my fingernails to crack open some cardamom seeds while the green tea leaves boiled in the water on the stove. The sun was setting and the sky was an eerie shade of blue green. The first rain of the season had cleaned the roads and whatever little snow that remained in the shaded corners of backyards was a slushy mixture of white and brown.

My guest was seated on one of the dining chairs, facing me sideways, as I worked on the cardamom in the kitchen. The steam from the boiling water was disappearing into the exhaust fan above, making a slight hum.

She was telling me about the creations of her father, who had passed away some years ago.

“Oh, and there was a swing in the backyard. The back door of our house in Houston used to open up into the backyard. Here you opened it, and there you stepped onto the grass. On the right side was a huge couch we got from a garage sale in the neighbourhood. It was real leather, brown and the most comfortable thing I have ever seen, to this day. On the left, there was our barbecue fixture. Right in the centre of the backyard was the swing my father made with his own hands in the summer of 1986. My little sister had just turned five and for the past few years, my father would occasionally stare at the lone sycamore tree in the middle of the backyard and say, “This sycamore is stiff and sturdy. And this backyard is cozy. The only thing we’re missing is a swing.” Everyone in the house would simply nod and go about their business. But once my father got something into his head, he made sure he saw it through.”

I dropped the black cardamom seeds into the boiling water and saw the specks twirl with the waves like dervishes.

“So a week after my sister’s fifth birthday, he hauled a thick brown rope and planks of oak in his truck. A saw, a drill, a rope, and a shaped plank was all it took for my father to make our house even more happy, if that was possible. My little sister got the first turn. Then it was me, then my brothers. My father made my mother sit on it and he kept swinging her for a good two minutes. The first evening, the swing was the centre of everyone’s attention. That night, we sat in the humid summer air while my mother made halwa on the fire. We took turns on the swing late into the night. For some reason, no one wanted to sleep. And my father? I can’t forget his smile. He was smiling all night.”

I was pouring the green tea into wide-mouthed china teacups. As I placed the cup in front of my guest, she said to me, silently, “That swing in the backyard was the last thing my father made for us. It’s like he knew he didn’t have long to live, the way he was determined to complete that swing.”

I was staring at the tea in my cup, my reflection clear, wavy and green. Then I looked up at her, at which point she said to me, “We buried him five days later. When I came back from the funeral, I went straight to the backyard. There was a slight summer breeze, the sun was hot, and the swing was swinging.”

She said she didn’t sit on it. She said she just watched it swing on the bent tree branch, empty and light, just like her heart.