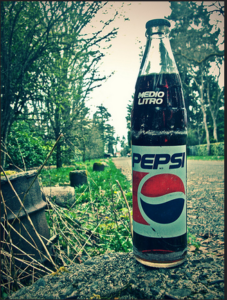 “Pepsi-Cola in a Glass Bottle” by Vorona Photography

When I was eight years old, I loved tagging along with my brother and cousin and walking, sometimes skipping, to the little cornerstore by the local neighborhood mosque. It was a five minute walk but thinking back now, the hot summer afternoons would melt away the minutes. There was something about the still slowness of time back then that ironically made it seem like fleeting seconds…so that before we knew it, there we were, zipping past the wide marble steps of the mosque, past the warmth of tandoors where naans of finite quantities were brought to life, and on the stone steps leading to the general store.

Like most children, my short terms goals in life revolved around candies, chips and drinks. Things like having enough money one day to have a room filled to the ceiling with candies, chips and drinks usually became my long term goal. But the moment was more important. The present. The now. So that now, as I stared at the round, red, white and blue Pepsi logo on glass-fronted fridges, and as I carefully studied the vapor tantalizingly, slowly, dripping down the length of the bottles, I only cared about one short term goal: having that cold, magical black drink of fizz in my hands, against my cheek, and most importantly, chugging it down like they did in TV.

But as I write this recollection of summer afternoon cravings, I realize that some things just stick with you, even though they are not a main part of the plot. Minor details that, in the moment, are so insignificant. So just as the most important thing in that moment was getting myself a cool glass bottle of Pepsi, the detail that sticks with me the most, and with a massive emotional quality too, is the bottle’s crinkled red metal cap, sometimes blue. The memory comes with a giant red sticker saying “fragile” on it; so I am handling it with care, lest it shatters into shards as I retrieve it from a decade and three years old compartment of my mind.

The course, sunburned hand of the shopkeeper reached into the refrigerator and confidently gripped a glass bottle made slippery with precipitated drops making trails down to the base. He picked it up, closed the door of the fridge, and reached with a similar-looking course, sunburned right hand to the handle of the fridge door onto which he had an old, worn out, partially rusted bottle opener hanging from red strips of old cloth braided together. Expertly fixating it on the bottle cap, and with one distinct metallic tick and a vacuumed pop, he would lift the cap and toss it in the bin.Then he would hand it to me but now that I think about it, that is not the most important part. It was the process. The vivid process of glass bottles and metal bottle caps and bottle openers and vapor that formed… the moment that stayed forever etched in my mind, despite my displaced conscious efforts.

In retrospect, and if I were to do a fast preview without much effort, my mind whispers to me in hurried tones melted away by thirteen summers and thirteen winters: summer, afternoon, marble, tandoor, stone, glass, vapor, glass, vapor, glass…and then he took the bottle out, fixed the bottle opener and popped the cap off…POP! Tick! fizzzzzzz… cool glass. Vapor. Summer.